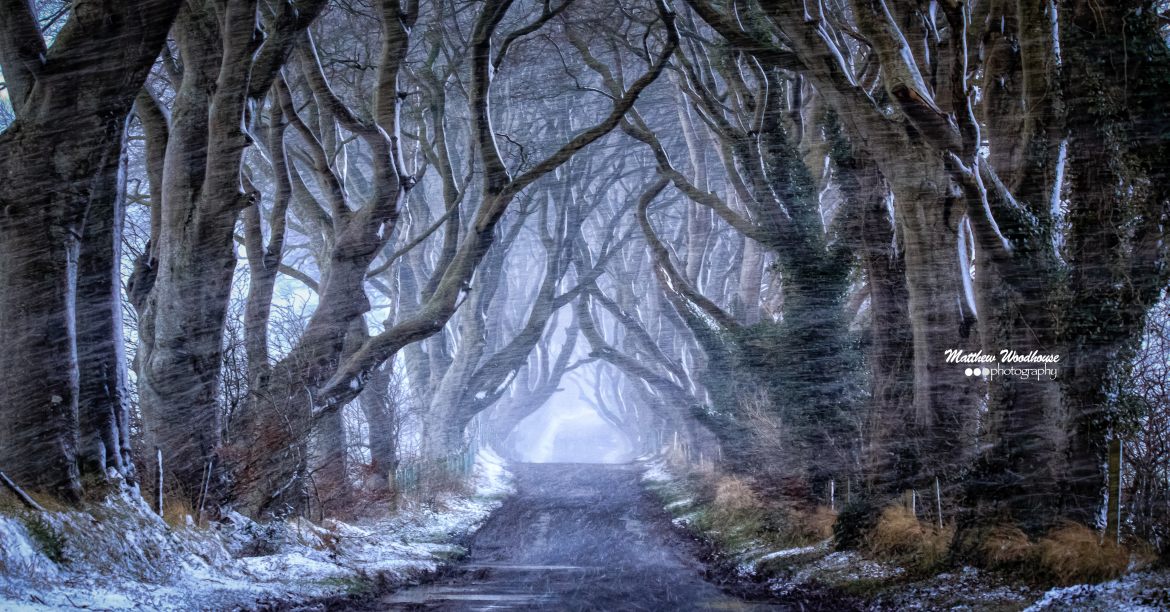 James Stuart built Gracehill House in c.1775 and named it after his wife, Grace Lynd. The family planted an avenue of over 150 beech trees along the entrance to the Georgian estate. It was intended as a compelling landscape feature to impress visitors as they approached Gracehill House. Today this unique, tranquil and spellbinding tunnel of ancient beech trees stretches along the Bregagh Road, intertwining and entangling to create a spectacular fusion of light and shadow.

The large estate surrounding the house has a royal heritage dating back to the early 17th century. King James 1 granted the land to a cousin who drowned on his way to Ireland before he could take possession of his new home. The estate then passed to his grandson, William Stuart, and remained in the Stuart family for many years.

The house and immediate grounds are now privately owned with some of the estate developed into a popular 18 hole parkland golf course and The Hedges Hotel.

Two centuries later, the ethereal tunnel remains a magnificent sight and has become known as The Dark Hedges, one of the most photographed natural phenomena in Northern Ireland and a popular attraction for tourists from across the world. With its mysterious and spectacular play of light and tranquillity the site has inspired visiting artists and photographers. Antrim-born composer Elaine Agnew premiered her compelling Dark Hedges composition at the BBC Proms in 2012.

A favourite local ghost story features the grey lady, a spectre that glides along the Bregagh Road, sashaying between the gnarled trees. She vanishes from sight when she passes the last tree.

Whilst some local people believe she is the ghost of a maid from the nearby house who died in mysterious circumstances centuries ago, or perhaps the daughter of James Stuart, referred to in some genealogy lists as ‘Cross Peggy’, others believe that she is a lost spirit from an old, deserted graveyard that is thought to lie hidden in the fields nearby. On Halloween night, the forgotten graves are said to open and the Grey Lady is joined on her walk by the tormented souls of those who were buried beside her. 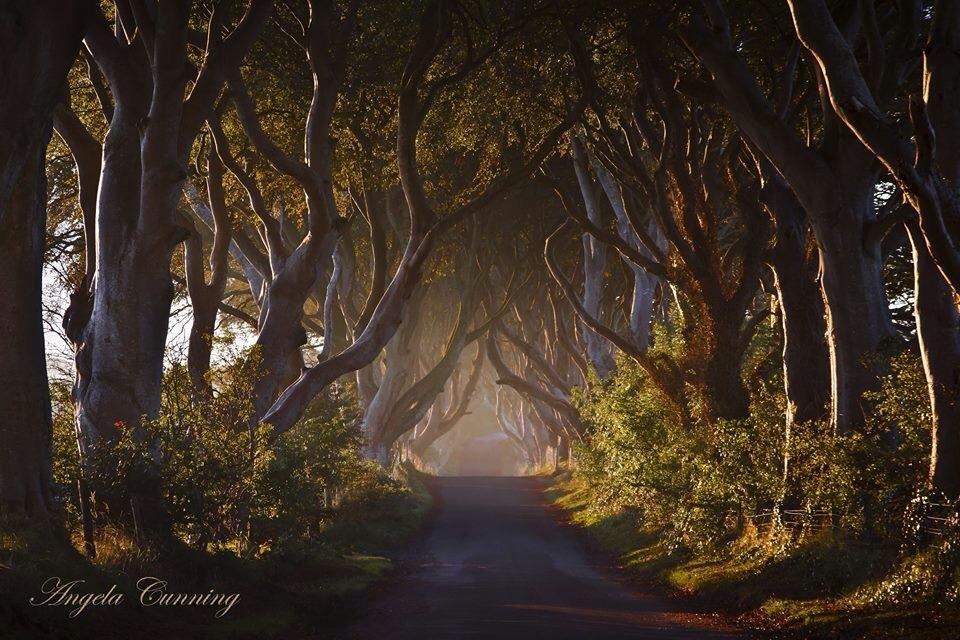 In 2014 ninety-four Beech trees (Fagus sylvatica L.) were surveyed and recorded as part of a Heritage Lottery Funded project commissioned by The Dark Hedges Preservation Trust and the Causeway Coast & Glens Heritage Trust. The trees ranged in age from mature to post mature which is estimated to be about 300 to 350 years. The life span of a typical Fagus sylvatica L. would be about 150-200 years.

Mature trees grow to a height of more than 40m, and develop a huge domed crown. The bark is smooth, thin and grey, often with slight horizontal etchings. The reddish brown, torpedo-shaped leaf buds form on short stalks, and have a distinctive criss-cross pattern.

Young leaves are lime green with silky hairs, which become darker green and lose their hairs as they mature. They are 4–9cm long, stalked, oval and pointed at the tip, with a wavy edge.

Beech is monoecious, meaning both male and female flowers grow on the same tree, in April and May. The tassel-like male catkins hang from long stalks at the end of twigs, while female flowers grow in pairs, surrounded by a cup. This cup becomes woody once pollinated, and encloses one or two beech nuts (known as beechmast). Beech is wind pollinated.

Interesting fact: beech can live for hundreds of years with coppiced stands living for more than 1000 years. [Woodland Trust] 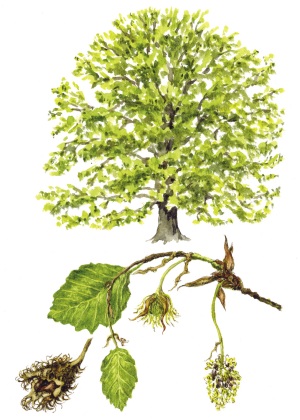 The beech woodland is home to a wide range of flora, mammals, birds and insects including:

The Brambling is a small bird similar in size and shape to the chaffinch, the male has a black head in summer, and an orange breast with white belly. In flight it shows a long white rump. Bramblings breed from Northern Scandinavia into Siberia. In winter they migrate south to the Mediterranean and west to Britain and Ireland. The Brambling is an irregular visitor. Instead of adopting a routine migration pattern they tend to move to where their food is easily found. Beech mast is an important component of the bramblings’ diet. Bramblings are usually seen foraging on the ground under a large area of mature, widely spaced and heavily cropping beeches. 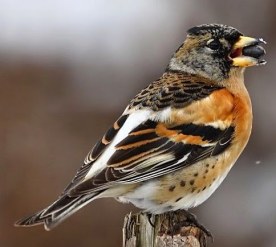 The Wood Mouse is sometimes known as the Long-tailed Field Mouse and is widespread, probably most common in woodland, rough grassland and gardens. It will gather food stores of berries and seeds in the autumn, which it keeps in underground burrows or sometimes in old birds’ nests. The Wood Mouse is mostly nocturnal. It can be distinguished by its golden-brown colour and relatively larger ears and eyes. 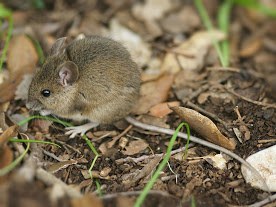 More recently The Dark Hedges avenue has been featured as the Kings Road in the famous HBO series, Game of Thrones®.

A railway once passed under the bridge on the Bregagh Road; going from Ballymoney to Ballycastle; via Dervock, Stranocum, Gracehill and Capecastle. The Ballycastle Railway opened in 1880. It was a narrow gauge railway which operated passenger and freight services for almost 70 years until it was closed by the Ulster Transport Authority in 1950.

In 2004 the Department of the Environment (NI) Planning Service placed a Tree Preservation Order on The Dark Hedges. The Order is intended to ensure the preservation of the trees while allowing work to be undertaken to safeguard road users.

There are coach/car parking and toilet facilities available at the Dark Hedges Estate – a two minute walk from The Dark Hedges. Contact the Estate to arrange parking. http://www.darkhedgesestate.com/

These magnificent trees are past maturity and branch breakages are unfortunately common occurrences.  In October 2017, in the interest of public health and safety and the preservation of the trees, the Bregagh Road was closed to all vehicular traffic (with exception to agricultural vehicles).  It is also advisable to avoid walking under the trees during or following stormy weather conditions. Visitors to the site should also be aware that the Ballinlea Road is a public thoroughfare with traffic travelling in both directions.

The Dark Hedges is a picturesque site and therefore it is important that visitors leave no trace in terms of litter or damage to the trees.

With over 120 miles of coastline along the Causeway Coastal Route there is a plethora of spectacular attractions including Northern Ireland’s only World Heritage Site at the Giant’s Causeway. For more information visit:

This website uses cookies to improve your experience while you navigate through the website. Out of these cookies, the cookies that are categorized as necessary are stored on your browser as they are essential for the working of basic functionalities of the website. We also use third-party cookies that help us analyze and understand how you use this website. These cookies will be stored in your browser only with your consent. You also have the option to opt-out of these cookies. But opting out of some of these cookies may have an effect on your browsing experience.
Necessary Always Enabled
Necessary cookies are absolutely essential for the website to function properly. This category only includes cookies that ensures basic functionalities and security features of the website. These cookies do not store any personal information.
Non-necessary
Any cookies that may not be particularly necessary for the website to function and is used specifically to collect user personal data via analytics, ads, other embedded contents are termed as non-necessary cookies. It is mandatory to procure user consent prior to running these cookies on your website.
SAVE & ACCEPT