The introduction of new legislation to regulate the felling of trees signals a brighter outlook for Northern Ireland’s natural heritage, says conservation charity the Woodland Trust. 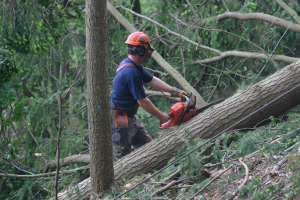 The Department of Agriculture’s reintroduction of felling licences, which took effect on 17 June, follows almost 15 years of campaigning by the Woodland Trust and its supporters. It brings Northern Ireland into line with the rest of the UK, where felling controls have been in place for years.

Under the new regulations, licences are now required for the felling of woodland over 0.2 hectares (0.5 acres)1, together with a requirement to re-establish the woodland under an approved management plan.  Forest Service will have responsibility for assessing and administering felling licence applications, in line with legal requirements and forestry standards.

Patrick Cregg, director of the Woodland Trust, comments: “In the late 1960s a decision was made to abandon the need for felling licences here in Northern Ireland.  And this lack of legal protection has resulted in decades of destruction to our trees and woods.  This month, some 45 years on, sees the welcome reintroduction of felling controls, bringing the province back in line with the rest of the UK.

“It’s no secret that we’re one of the least-wooded countries in Europe, with just 7 per cent woodland cover.  This very basic legal protection will now put our trees and woods on a more secure footing.  It’s good news for people, for wildlife and for the future of our natural environment.”

Find out more at www.dardni.gov.uk/forestservice

This website uses cookies to improve your experience while you navigate through the website. Out of these cookies, the cookies that are categorized as necessary are stored on your browser as they are essential for the working of basic functionalities of the website. We also use third-party cookies that help us analyze and understand how you use this website. These cookies will be stored in your browser only with your consent. You also have the option to opt-out of these cookies. But opting out of some of these cookies may have an effect on your browsing experience.
Necessary Always Enabled
Necessary cookies are absolutely essential for the website to function properly. This category only includes cookies that ensures basic functionalities and security features of the website. These cookies do not store any personal information.
Non-necessary
Any cookies that may not be particularly necessary for the website to function and is used specifically to collect user personal data via analytics, ads, other embedded contents are termed as non-necessary cookies. It is mandatory to procure user consent prior to running these cookies on your website.
SAVE & ACCEPT