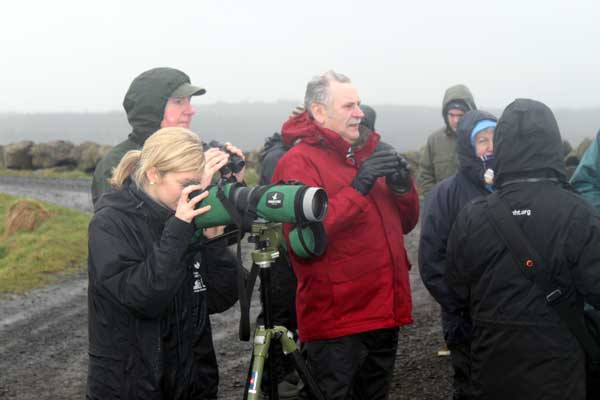 World Wetlands Day was on 2nd February and there is nowhere more perfect than the mudflats of Lough Foyle to experience the biodiversity of a RAMSAR (wetland) site.

Richard Gillen Countryside Recreation Officer with Limavady Borough Council and Andy Sides from the Loughs Agency hosted a small group of staff and Directors from the Causeway Coast & Glens Heritage Trust at the RSPB reserve in Ballykelly on Thursday to discuss the importance of the Lough in terms of tourism, agriculture and biodiversity.

Tom McDonnell from the Rathlin Community Association, a keen wildlife photographer and bird spotter pointed out a variety of visiting birds including the Little Egret, Oystercatchers, Whooper Swans and Curlews.

Andy Sides said: ‘The Little Egret, once an extremely rare bird in these parts, has been occasionally sighted feeding in the marshlands bordering the lough.’

Sam Cole, Councillor with Coleraine Borough Council and RSPB member spotted in the distance three white and grey gulls feeding off the rich arable flatlands which he identified as the Glaucous Gull, a rare visitor from Iceland and the Arctic region.

Cllr Roy Craig from Larne Borough Council and CCGHT Vice Chairman thanked all those who had braved the cold and rain: ‘These study trips have been organised as part of CCGHT’s ten year celebrations but they are also a very useful tool for experiencing and learning about sites within the Trust’s remit.  The Trust organised a similar trip in November to Gracehill in Ballymena to experience the built and cultural heritage of a Moravian settlement and today we have been very fortunate to experience the natural heritage of a very important wetland site.  We look forward with intrigue to the next trip.’