Thanks to the ‘NGO Challenge Fund’, administered through the Northern Ireland Environment Link, the Causeway Coast and Glens Heritage Trust have been able to work with Coleraine Borough Council to upgrade access at East Strand, Portrush.

Sand dunes are an active ecosystem and are a very important  habitat for plants and animals. East Strand is a popular walking and running route, with an informal path and some desire lines existing before upgrade works. This existing access was opened up with the removal of a fence, enhanced with the installation of boardwalk and directed with a simple fence along the steep dune side of the path.

Previous to the works the dunes were damaged as people were climbing and running down over the dunes. This hurts and harms the dunes system, meaning blow-outs formed destabilizing the dunes and causing a lot of sand to fall onto the path below. By directing users of the path to new steps and fencing and filling in the blowouts it is hoped the dunes will heal and the path below will be clear of sand.

To tackle an on-going North Coast issue CCGHT will be installing two dog foul bins at this site. 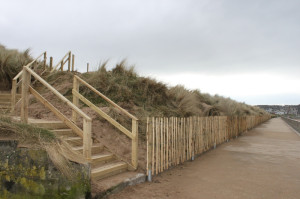